Trinidad: Immigration officials, a journey up North and a few days on the beach doing absolutely nothing.

I've never had any trouble getting through immigration before... We'd read somewhere that you 'might' be asked to provide proof of onward travel upon arrival in Trinidad, but thought that a bank statement and not looking like too much of a tramp should be enough. Unfortunately, we must have looked a little too much like illegal immigrants as after asking us a series of grilling questions, the stony faced lady behind the immigration desk asked us to walk back past the queue and wait on the plastic chairs o the far side of the room. We nervously watched everyone else filter through, sitting on the edge of our seats as she appeared to be having a cheerful natter with some of her colleagues. I couldn't imagine the embarrassment of having just said goodbye to my friends and family, hoping to go away for half a year or so, only to be sent back the next day after being refused entry into our first destination.

Luckily we'd booked our first night's accommodation, which (after they had phoned to confirm) somehow proved our intentions were legitimate. She let us through and we were doubly happy to clear customs without being pulled over for bringing dried bananas and figs into the country.*


We arrived in Port of Spain a little on edge. It was dark, our greeting to the guesthouse seemed a little disinterested and when somebody said hello on the 300m excursion to the shop for snacks, we looked at the ground and walked faster. That night I probably slept for around three hours, listening to the traffic and stray dogs outside and hoping I wasn't being bitten by bed-bugs, but somehow by morning I was full of beans.

We set out early through the city, realising that here it isn't only the crazy people who greet you in the street. Away from the bustling Independence Square and other busy areas it seems only polite to give people a casual nod of the head or even  Good Morning if you happen to catch their eye. We make quite a sight trekking through urban areas with all our camping gear, but nobody has given us too much hassle and occasionally it works in our favour when people feel sorry enough to stop  their cars and let us cross the street. After a dinner of 'cheesits' and chocolate we were eager to try some local food. A jostling bunch of locals attracted us to one particular street stall and we gingerly stood on the fringes waiting to be served. After a minute of two of feeling intimidated, a helpful business man told us we'd have to push. Probably more due to his interest than our pushing we got given two doubles** and drinks. The doubles are spicy and sweet and very messy and our success in finding good street food gave us a little confidence. By the time we'd negotiated Trinidad's overcrowded public transport network (even if our English queuing sensibilities made us miss one connecting bus and have to wait an extra hour) I felt we were back in control.

Described in the guide book as 'undeniably basic', but also 'the cheapest place to stay in Trinidad and Tobago', Sea Sands Camp in Toco seemed like the obvious choice for our spare few days. Run by a very elderly couple, but providing all food and board of TT$100 a night (about £10- accommodation is generally pretty expensive here) we were happy to find somewhere in such a remote and picturesque location.

On Tuesday we made a sweaty excursion to Salybia Bay. It's not too far, but Dan and I are used to a more Scottish climate and arrived in need of a good cool down in the sea.

We had the beach nearly to ourselves for the first couple of hours (we've been waking up ridiculously early), but towards lunchtime were joined by a few Trinidadian families and food stall owners  who didn't quite seem to know what to make of us. We've been wondering if there is something a little wrong with the way we are initially interacting with people as they can sometimes seem a bit standoffish or wary to begin with but then become really friendly and chatty if we persevere. After a day or two we decided to just say a cheery "Good Morning" to everyone we saw and found that the vast majority of people reacted well to that. 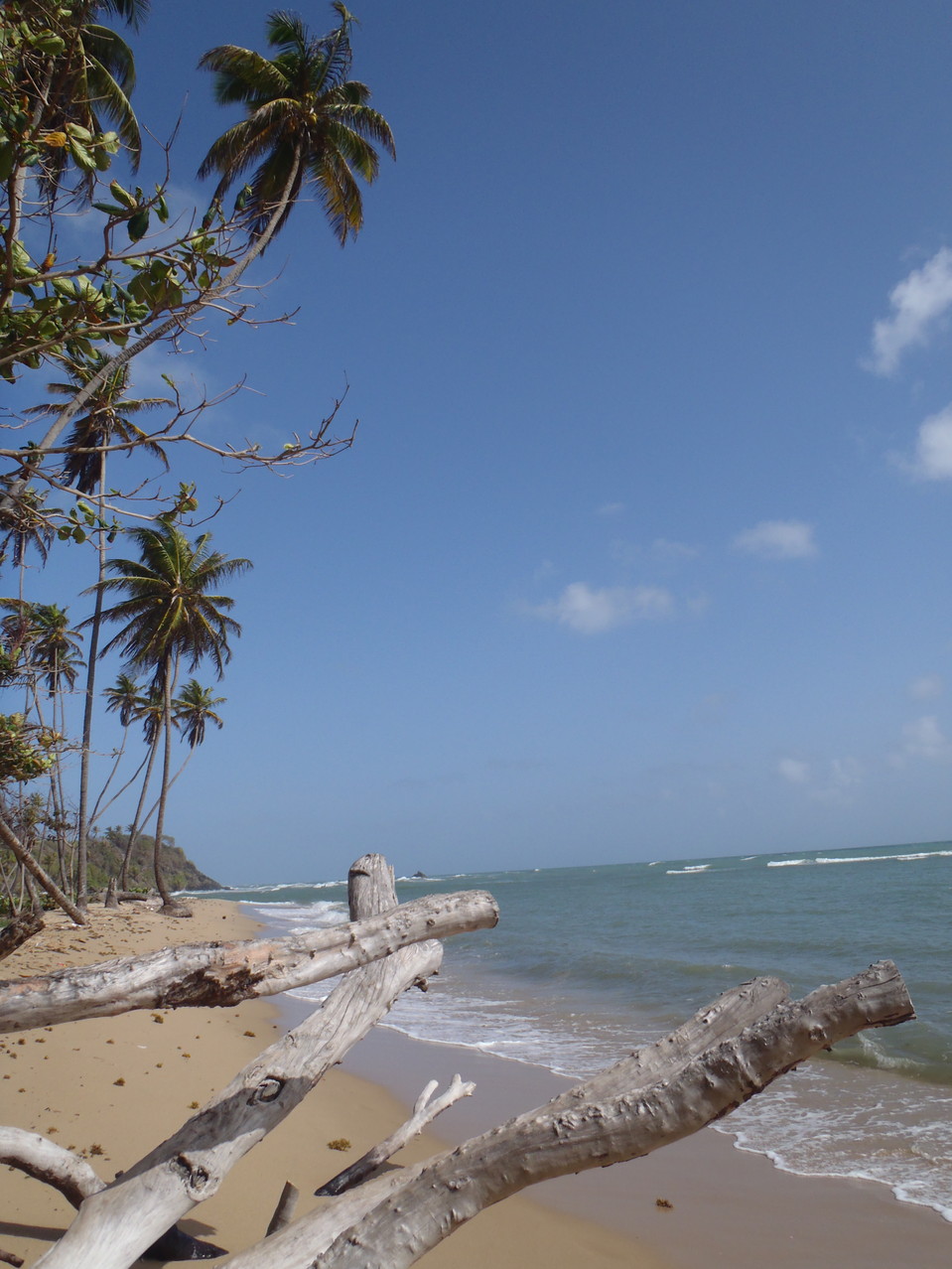 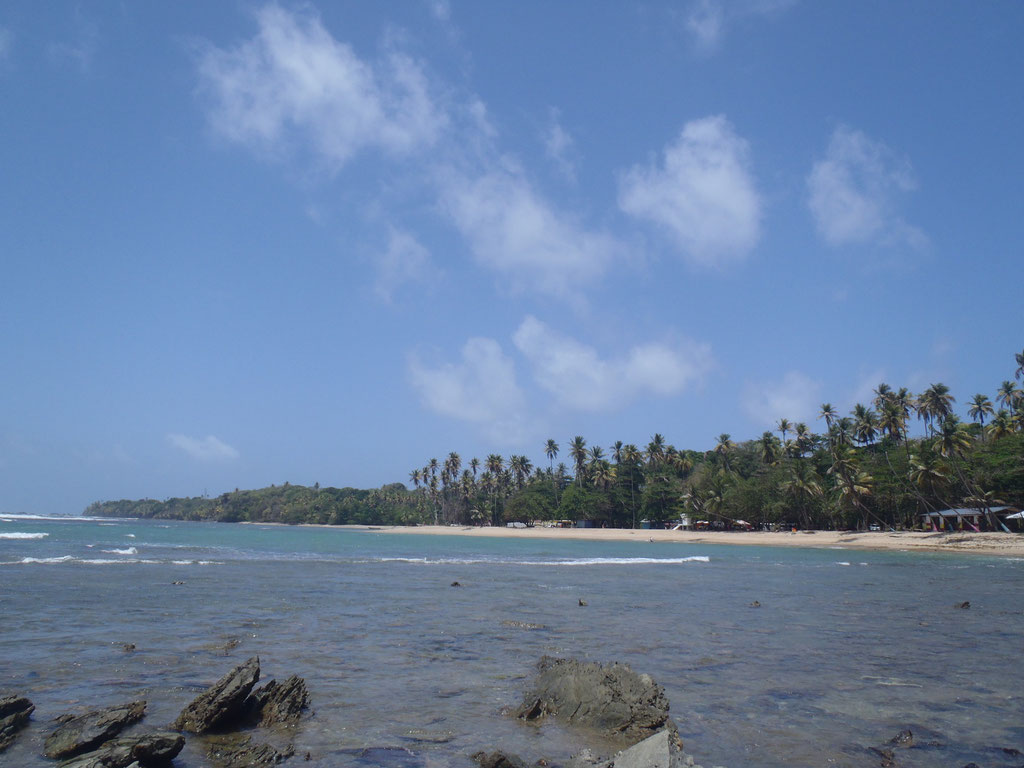 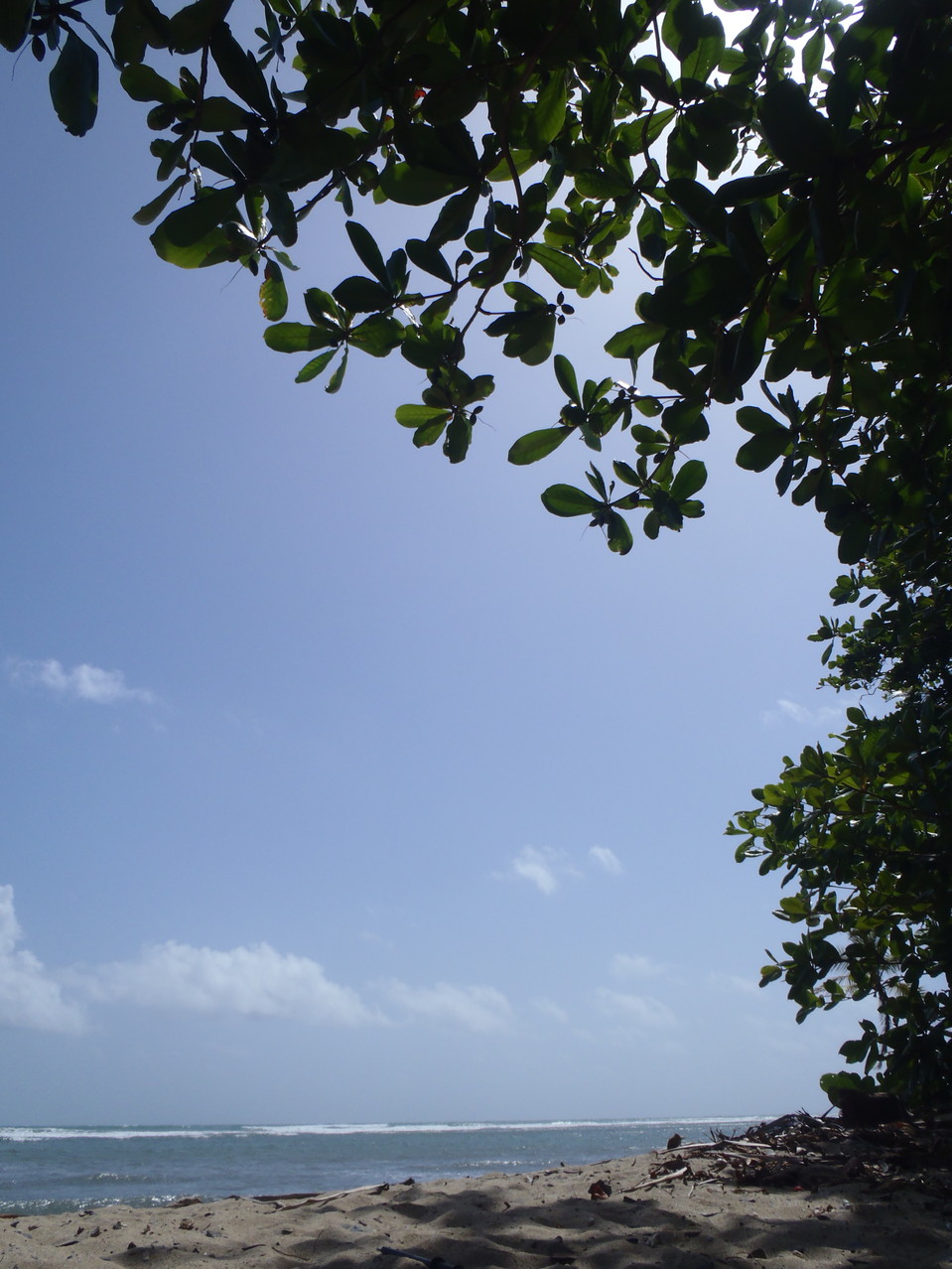 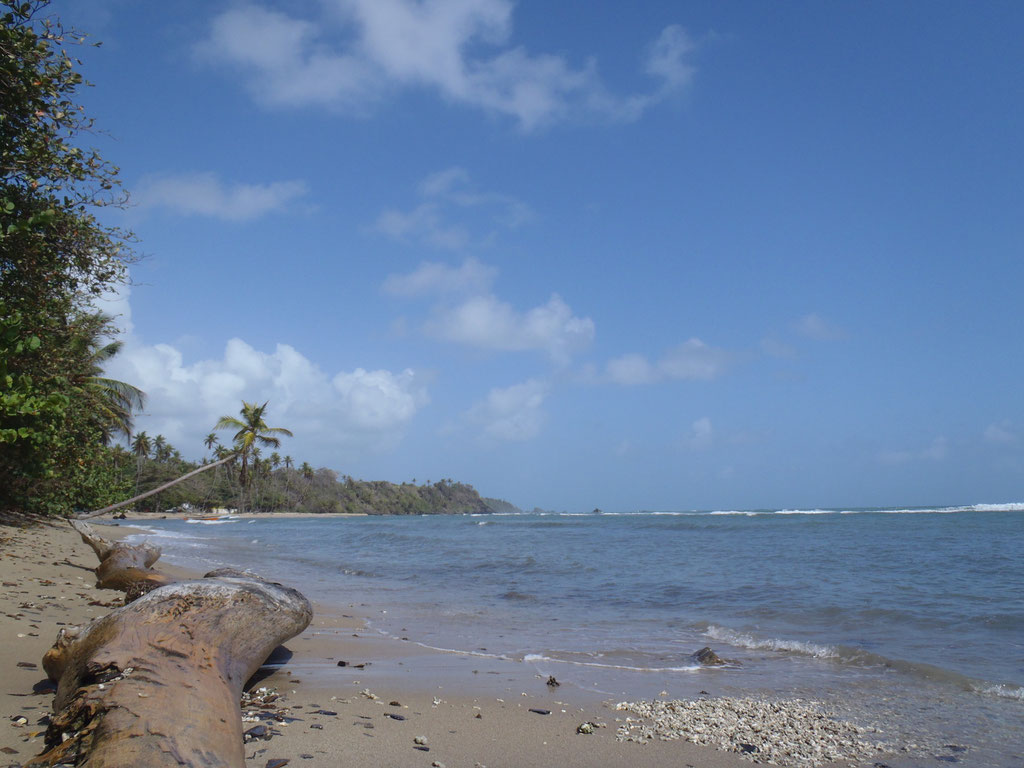 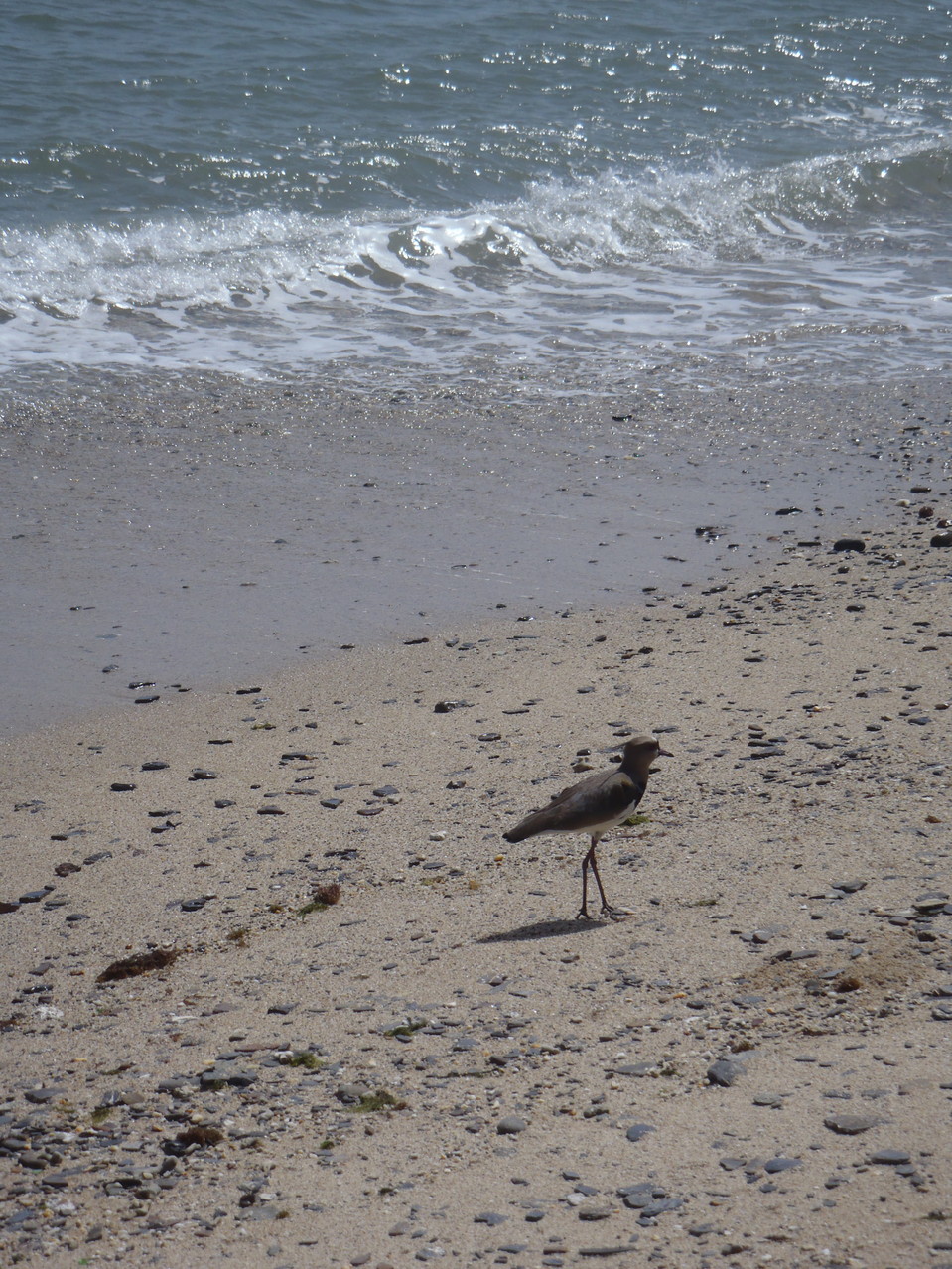 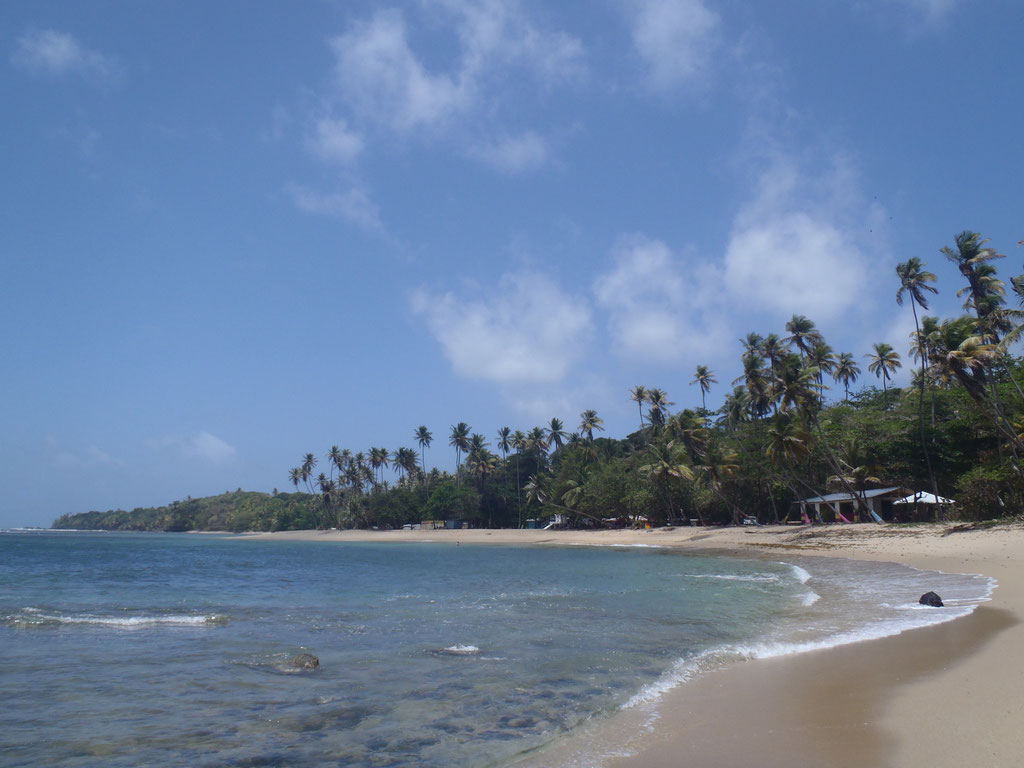 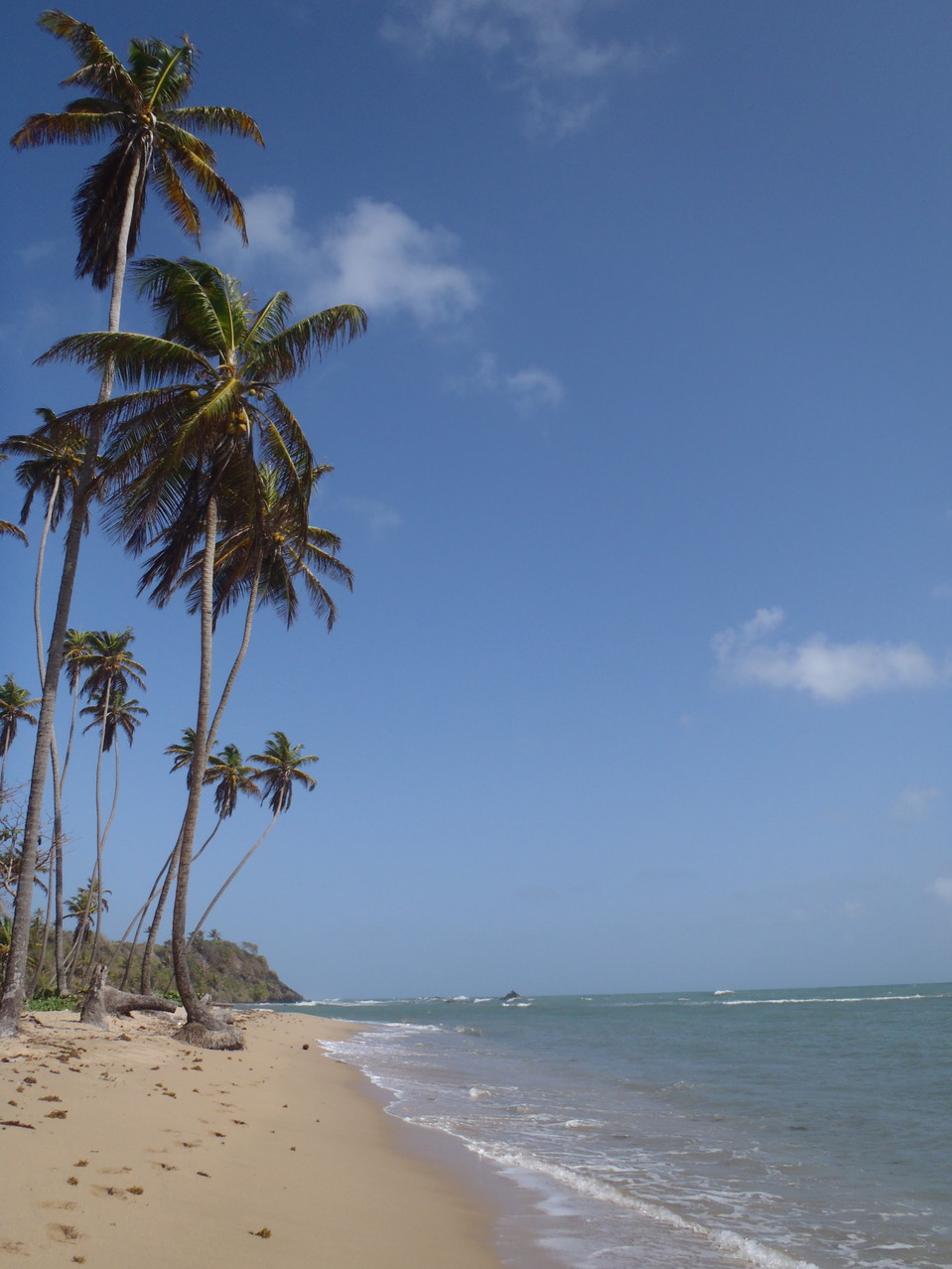 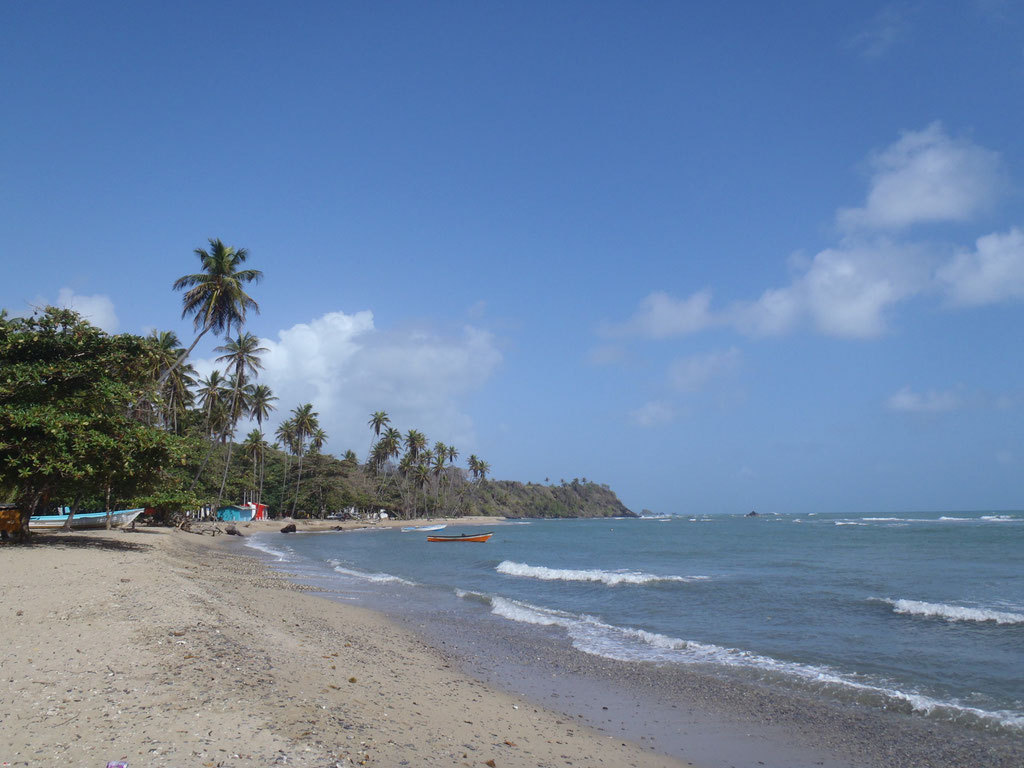 Other than being told (in a lot of detail a great many times) how to make sea-moss into a drink, the main noteworthy parts of staying with our hosts were our excursion to Grande Rivere to see the turtles and the near destruction of their truck.

I'd been raving about seeing these turtles for months and was pretty disappointed when our first workaway (in Grande Rivere itself) fell through, so I was pretty excited when Patsy said her grandson would drive us there to see them nesting. As with most things you built up to  in your head however, the event itself perhaps didn't quite live up to the idea. Unfortunately the Grandson didn't seem up for the idea of driving us and it was left to the old man who was obviously pretty uncomfortable driving in the dark. I awkwardly sat between the couple as we wove around the bends, over pot holes and avoided places where the road had fallen into the sea at a painfully snail-like pace. When we got there we realised it was quite a lot more expensive than we thought for a permit to get onto the beach at night, which put us in a bit of a bad mood from the start. Our tour guide sounded like he'd had his voice box replaced with a tape player, refusing to be drawn into any real conversation, and we probably both had a touch of heat-stroke from spending the whole day in the sun. Looking back I feel like a spoiled brat to have not appreciated it more at the time- the turtles really are amazing! Nesting Leatherback females can be as big as I am tall and up to 300 lay their eggs on that beach every night. I just wish we could have explored alone, but understand that you can't have hoards of tourists doing that every night. I was really sad to see one with a hook stuck in its mouth. The beach has to belong to the turtles really.

The second notable event was coming home to find this. ->

Their truck had simply rolled off the driveway. The rescue attempts were somewhere between exciting and terrifying to watch. The first attempt (using a digger, chain and bits of wood under the wheels) seemed to be almost promising, despite the digger's front wheels being two foot off the ground under the strain, until something under the truck collided with the concrete ledge. At that point the chain snapped and the truck hurtled another ten feet down the ditch. Thankfully nobody was hurt but now none of its wheels were left on the drive. The second team of men (including some of the men from the first) spend over an hour with a mini-van, ropes and the clever shifting of an engine (ballast) over the back wheels to stop them from slipping. One brave/mad man sat inside the van reversing as it was painstakingly pulled back up.

Now we're back in Port of Spain and trying to figure out what to do with our lives as the ferry to Tobago has broken down and there's a huge backlog of passengers (we waited four hours at the ferry terminal yesterday for the chance of a ticket with no luck). I'm sure we'll figure it out soon though.

Sorry about the mammoth post, I'm so happy to be travelling again I got a bit carried away..

*Thanks Rod, those have helped us out in a few peckish spots.

Useful and practicle information which is too boring to read unless you are going to Trinidad yourself...

Dad- Toco is a fishing village, so I thought you might want to see a full size photo of one of the boats. As far as I can see they all look pretty similar and are quite wide compared to those in Thailand etc. The sea gets pretty rough here and has waves big enough to make it a bit of a surfing destination. This boat is called 'Sharp Point I' which I thought was quite funny. If you click on the image you should be able to see it bigger.