The Yungas, where the rain-forest begins to creep into Bolivia's towering mountain range, are just a few hours North of La Paz, but an entirely different world when you actually arrive. With panoramic views of tree coated mountains from the picturesque town centre, Coiroco seemed like a promising beginning for an adventure.

As much as I'd like to give a heroic account of our battle through the jungle or explain all the best things to do in the area, it would be misleading to recount our stay as an action packed success. The town is safe and relaxing which gave us little urgency to move and after a couple of days lounging, our one attempted excursion ended less spectacularly than expected.

After two hours climbing up and around the edges of mountains, our path to the supposedly most impressive waterfall in the area was blocked by a large, metal gate and unmistakable sign. Had it been in Spanish alone, I might have been tempted to fain ignorance and climb up around, but the large red translation below told us in no uncertain terms not to try and cross.

We turned back and returned to the once pretty cascade we'd passed along the way. Scarred by a large concrete damn and probably supplying water for the village, it wasn't the untouched natural beauty I'd been hoping for. Below is my carefully cropped, but still relatively unimpressive photo...

All things considered, instead of pretending to be your travel guide to Coiroco, I've decided to focus on the flora and fauna which were really my main reason or wanting to visit in the first place. Along with a selection of predictably unphotographable(?!) hummingbirds, the tropical climate is rich with a myriad colourful insects and unusual plant-life. The following photos are just a little taster of what to expect if you visit.

For nature lovers, Coiroco is a great base to explore this tropical part of the Yungas. There are hundreds of other interesting birds, insects and plants to find and maybe, with a little perseverance, you'll even make it to the waterfall.

Not so long ago the road to Coiroco was considered to be one of the most dangerous in the world, killing hundreds of travellers every year it was used. Thankfully, something was eventually done and the new paved road has barriers and even two lanes. Now from La Paz, a mini bus costs B20 and takes around 3 or 4 hours. The correct terminal in the capital is called Villa Fatima (which can be reached by many of the small buses circling the city for a couple of Bolivianos) and there seems to be around one bus to Coiroco per hour.

The return journey is the same price- mini buses leave from the central plaza in Coiroco.

There are many places to stay in Coiroco. Ours was very dirty and not particularly to be recommended, but you should be able to find something for B20/30 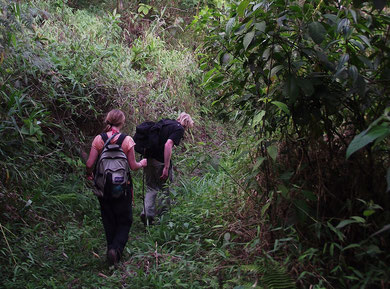 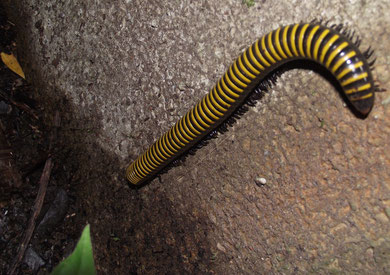 To read about our first disastrous search for a waterfall and see more photos of strange-looking creatures (including a giant stick-insect) you might like to have a look at my post about Mindo in Ecuador.

There's one more jungle based misfortune... The time a frog got stuck on my face, Honduras