After crossing the border into Senegal, we made a bee-line for the coast. We were looking for surf in Toubab Dialaw; it took three days to arrive. We walked south, right out of the village, to where women were collecting rocks from the sea and then a little further, and bobbed in the waves like seals. When it got bigger, the ride was short and dumpy, smashing Dan into the sand and grazing his head. It didn't stop him trying again of course.

After two nights in Keur Dofi (highly recommended, see below), we went to stay in the spare room of a Senegalese/French couple (Milli and Kiki). Despite our trouble communicating, they made us feel very welcome; we drunk together in the evening, they took us to a local surf spot and invited us to dinner (twice). Milli was a wonderful cook and after buying a freshly caught fish in Niangal (a village slightly north), she barbecued the Dorade whole and we ate them with hand-made chips, onion dressing and salad from their garden. 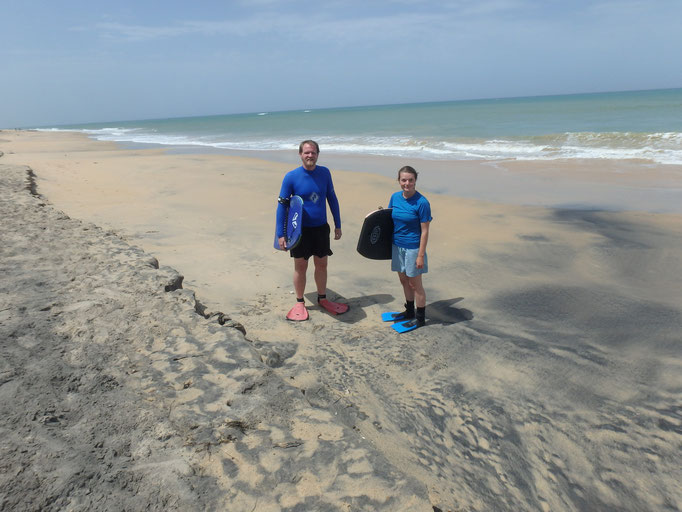 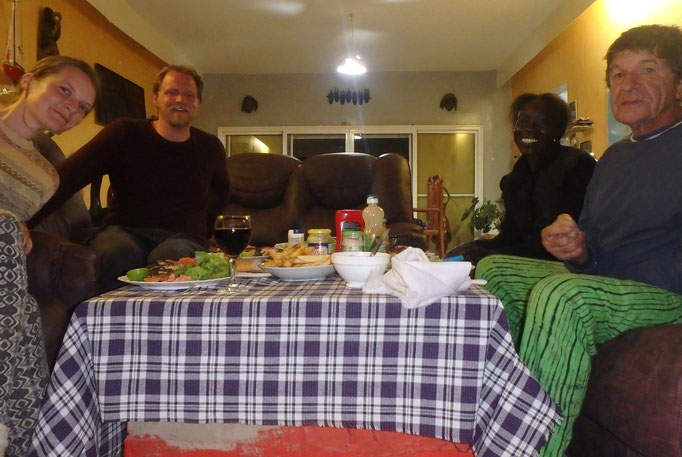 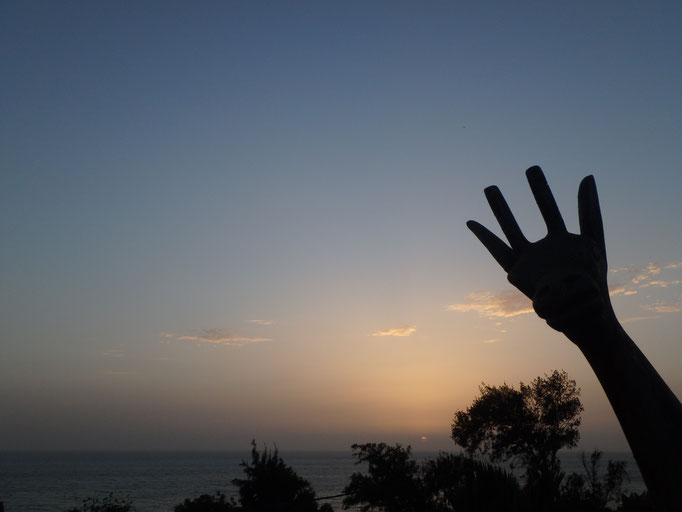 From Toubab Dialaw, we navigated (/got swept along by) a variety of public transport vehicles as far as Nianing.

What we had hoped to be a relaxing stop-off, turned into a half-day tour, when Dan made the mistake of asking the friendly warden Pierre where we might find a shop. (Due to our lack of French) he insisted we go and see the "biggest baobab in Senegal" together on a caleche (a sort of horse cart). We weren't particularly keen on either aspect of the adventure, but didn't have the heart or vocabulary to escape.

Only after several hours of being bounced behind the poor horse, much trudging through sand ourselves, being introduced to dozens of people, buying some accara (deep fried bean patties with spicy onion sauce), going to the bakery, him buying us a drink in his favourite bar and us ordering pizzas for dinner (one for him too though he didn't ask or even hint), we were finally allowed to relax in the sunset.

He told us some of Senegal's problems and we tried our best to follow. Horribly, up until the point we left him being, we spent the whole time waiting to be asked for money. The question never came.

From Nianing, we went back to the lunatic dust bowl Mbour (forlornly singing child beggars*; outrageously huge, air-conditioned French supermarket Auchan and piles of dates to mark the start of Ramadan) and caught another range of baffling transport as far as Ndangane, the edge of the Sine-Saloum Delta.

Excluding a small collection of very insistent, free-roaming craft sellers (probably exacerbated by plummeting tourist numbers now at the end of the season) and a much larger population of mosquitoes, Mar Lodj was spacious and peaceful.

We shared a boat trip with a group of young French people and saw hundreds of (impossible to photograph without my big camera) birds getting ready to roost at sunset...

After that, we had little more to do than wander in the vast expanses of open land to the south, swim from the beach and occasionally visit the village for groceries.

To take a beer from one of the fancier beach-side establishments at sunset was a real luxury.

Without doubt the most jarring aspect of Senegalese/West African culture is the still relatively widespread tradition of sending young children away for a religious education which can involve begging on the streets. Known as Talibés, these children are as young as five and go up to twelve years old. The boys will often be found (/they will find you) singing or holding out collection tins around gare routières and elsewhere in bigger towns and cities. It is pretty hard to know how to respond to this, but I try to acknowledge them without giving money and will instead donate to Empire des Enfants (offering many services including medical care and a safe environment to play in Dakar) and Maison de la Gare (medical care, French classes and a dormitory for run-aways in Saint-Louis). It would certainly be nice and advisable to buy fruit from a stall and ask the owner to distribute it amongst the Talibés. Spreading the concept of endless pocketed toubabs (foreigners/white people) should not be encouraged and a local person will do a much better job of the distribution.

Currently £1 is around 750 Senegalese CFA.

"Know Before You Go"

I have written a whole post about what to pack and how to prepare for your trip to Senegal.

We definitely overpaid on some occasions, especially for the bag, but it is difficult to know and probably not important enough to dwell on...

Sakado was the only accommodation I could find within our price range on Mar Lodj, but if you have a bit more to spend, it would be worth staying at the locally owned Farakaba, luxurious Le Bazouk Du Saloum or any of the other water-front properties; partly for the view, but mainly for the mosquito deterring breeze.

We took advantage of the kitchen at Sakado.

Toubab Dialaw - balafon/kora lesson at Sabo Bade- 7000 CFA for an hour (balafon teacher will probably try to sell you his CD for 10,000 CFA, but you can of course refuse).

Beaches around the world:

If you want to visit the beach in The Gambia, try Sanyang.

Some more peaceful beaches around the world: